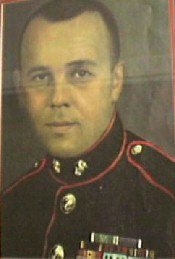 GySgt. Galen Francis Humphrey. Navigator, KIA 01 Feb. 1966 On 01 Feb 1966, a KC-130F HERCULES of VMGR-152 departed DaNang Air Base to provide airborne refueling support for tactical aircraft scheduled to conduct operations in the vicinity of Haiphong, North Vietnam. Throughout the mission the aircraft was under radar observation by the DaNang Air Operations Center. The strike missions were cancelled due to target area weather conditions and the KC-130 was cleared to return to base. At 1845 hours the aircraft neared Hon Co Island ("Tiger Island") north-northeast of the NVN/SVN border area. Although Hon Co Island was thought to be uninhabited, one report indicates that the KC-130 crew sighted signs of activity on the island and advised DaNang that they were going to take a closer look. At 1849 the KC-130 failed to respond to DaNang's radio call and shortly afterwards it disappeared from radar. Search and rescue efforts were mounted immediately but no trace of the aircraft or crew was found. The six Marines aboard were classed as Missing in Action. A Marine Board of Inquiry reviewed the KC-130 loss and concluded that all evidence indicated the aircraft was lost at sea with all hands due to enemy action. The status of the aircrewmen was changed from Missing in Action to Killed in Action/Body not Recovered on the basis of the Board's findings. Vietnam Wall Panel coords 04E 129 GySgt. Humphrey was the Navigator of aircraft 149809 when it was shot down over the Gulf of Tonkin near Tiger Island, Vietnam Feb 1st 1966. A Korea and Vietnam veteran, Galen was described as a loving husband and father who was suppose to be on his last tour overseas.